Irina Burlacu didn’t want her PhD thesis on the tax and benefit system for cross border workers in Luxembourg and Belgium to be dusted up in the library. 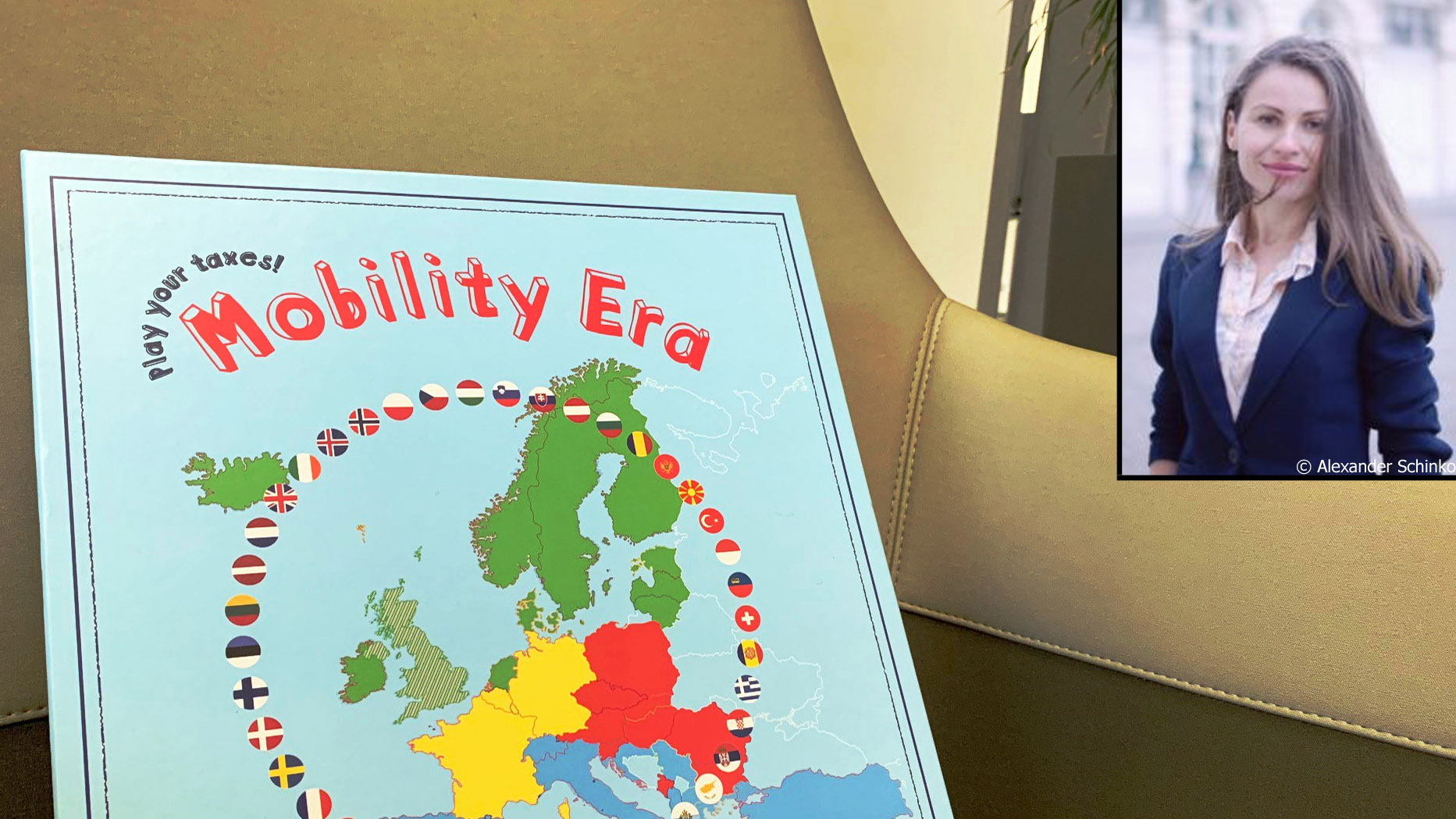 Irina launched the startup platform Researchista – a combination of fashion modes with research hints, through which she also launched the “Mobility Era. Play Your Taxes!” game.

When Dr. Irina Burlacu completed her PhD thesis on the tax and benefit system for cross border workers in Belgium and Luxembourg, she asked herself: Now that I have spent years on this research, how can I best communicate it?

The answer: translating the research outcome into a board game combining income and tax levels from 41 countries with country knowledge – ‘Mobility Era: Play Your Taxes!’.

Dr. Irina Burlacu is a social policy professional. For her PhD in Social and Public Policy at the University of Maastricht, Irina and her supervisor Prof. Cathal O’Donoghue built a micro-simulation model of the tax-benefit system for Belgium and Luxembourg, focusing on cross-border workers.

“Traditionally, welfare systems are designed for one state solely, yet in current times, flexibility of social policy in different types of countries becomes an acute necessity. Hence the name of the game: “Mobility Era. Play your taxes!”

Irina’s thesis looked at how the principles of free movement for work and social security coordination regulation (883/2004) work in practice – this is where we approach the theme of the game.

What is the board game about?

“The game couldn’t have social benefits, cross-border work and taxes as topics at the same time. I had to choose a topic, taxes seemed the catchiest. It was in the conversation with the representatives of one of the largest fiscal education platforms of the European Commission, called ‘TaxEdu portal’ that fully validated the choice and importance of the topic for the education sphere.”

How does it work?

Based on the most recent statistics, the game takes the players through a range of simulated real-life events – for example, the changes if you move from one country to another, or if your spouse gets a job in a different country. Depending on your age in the game, you get to experience events that are characteristic to several phases in real life (from childhood to old age). The goal of the game: the player with the most Happiness Points (HaP) wins.

“Free movement in 41 European countries, changes in average incomes and taxes by country, life events and life-cycle of mobile worker are core the principles reflected from the thesis into the game. Every square on the game is a year of life. The game starts at 11 years old and ends at 99. By throwing the dice and passing through the squares on the board, the player advances in age.” 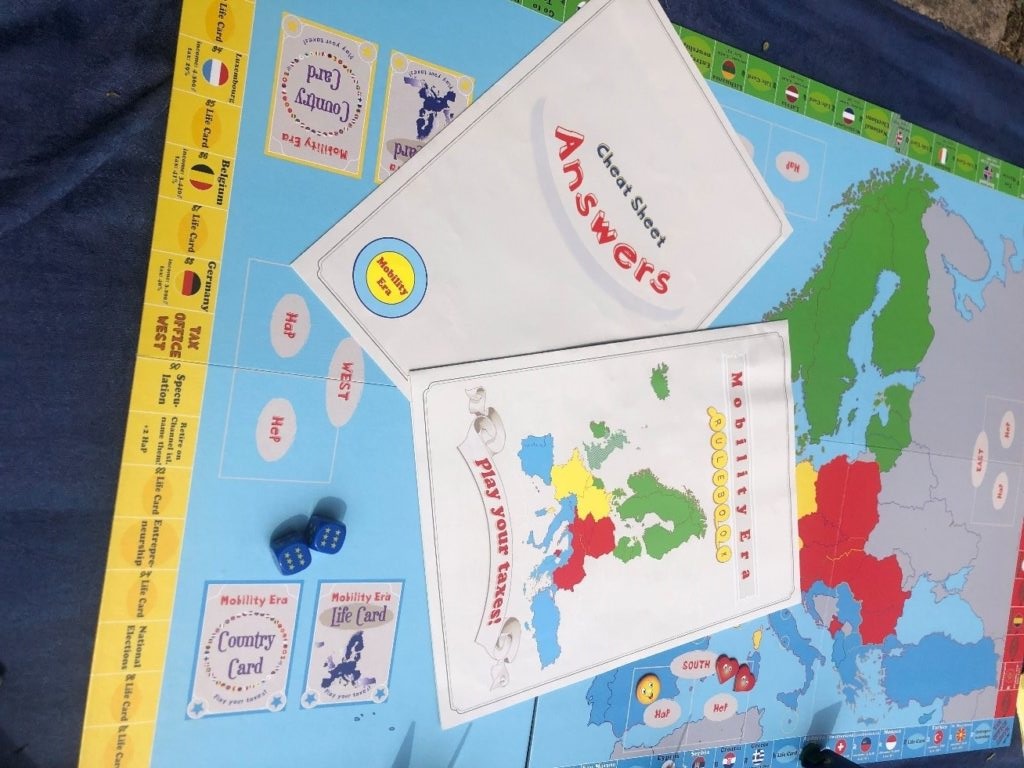 How is the feedback about the game?

Irina’s approach to ensure her PhD work was translated to an accessible, educational format has been praised by the World Economic Forum, the EU Commission and fellow researchers, such as Jean- Monnet Professor of EU Law, Alberto Alemanno:

“Irina Burlacu’s Tax Game proves that academics can and should translate their research into accessible and relevant initiatives. Intellectual work can no longer be separated from action.”

The game is already being played in 25 EU Member States by institutions such as the Ministry of Finance and tax inspectorates, as well as few European schools and parents, here is what they think.

How did the idea come about?

“The game idea occurred to me in the last months before graduation while flying to Chisinau. When I landed, I asked my brother to setup a game that would have elements xyz. I was too busy graduating and finding a new job, and he is good at gaming!

With apps and online games having become somewhat standard, Irina wanted distance from this approach and specifically opted for what can by now be called “old-school”: a traditional, educational trivia style board game, accessible to anyone from the age of around 12-14 upward.

A PhD thesis is a body of several years of work and countless hours of writing. Yet, most PhD theses do not go beyond that, meaning the outcomes of the research simply and mostly do not reach ordinary citizens.

“Research communication or valorization is honestly not on the priority list of a researcher, at least, during the PhD. Unless there is a grant on communication or some extra will, researchers mostly don’t have time to communicate to the general public. They are focused on publishing and getting the next paper/experiment done.

“My way to give back happened to be: a game. This way, everyone can play it and before fully realising it, I started a new journey in life – entrepreneurship in education,” Dr. Irina Burlacu explains.

Start of the startup platform Researchista

Upon completing her PhD, Irina explains that she was expecting it would be easy to find work, but things did not turn out as expected.

“After successfully graduating my PhD program in late 2014, I was surprised that after so much hard work, I had to look for a job that was not necessarily related to my field and that was not easy to find in that area of specialization. I was expecting that the job market for highly skilled professionals to be flooded, but tough luck – nobody was waiting for me. So, I started to reflect on my passions and life mission.”

Irina launched the startup platform Researchista – a combination of fashion modes with research hints, through which she also launched the “Mobility Era. Play Your Taxes!” game.

“Researchista is a start-up meant to give Researchers a ‘human’ face. It sort of personal blogging with a fun and playful interface, rather than serious as many would expect. All researchers are welcome to share their story in relaxed and lay manner! In fact, the idea behind is to offer an entrepreneurial expression to other researchers who have no time to do entrepreneurship but have interesting ideas for the public.

Researchers on the Researchista platform will always have a big “R” in front. It is Researchista’s way to remind the general public about the importance of intellectual work and Research done to help society advance technologically, medically and in many other ways.”

Where can I buy the game?

You can buy the board game through the game’s website. 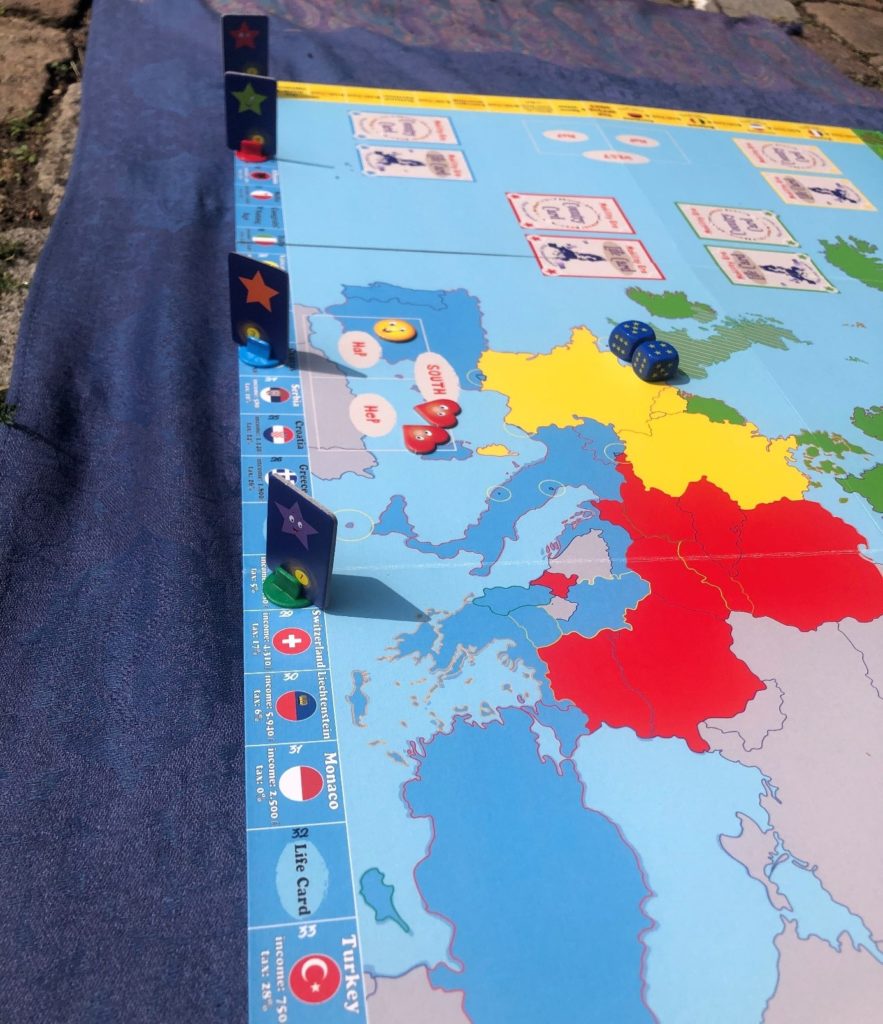 Irina Burlacu is a social policy professional with experience in research, teaching and training. Aside from being the Founder of Researchista, she is consultant and an affiliated lecturer at the Center for European Studies at the University of Maastricht in the Netherlands. 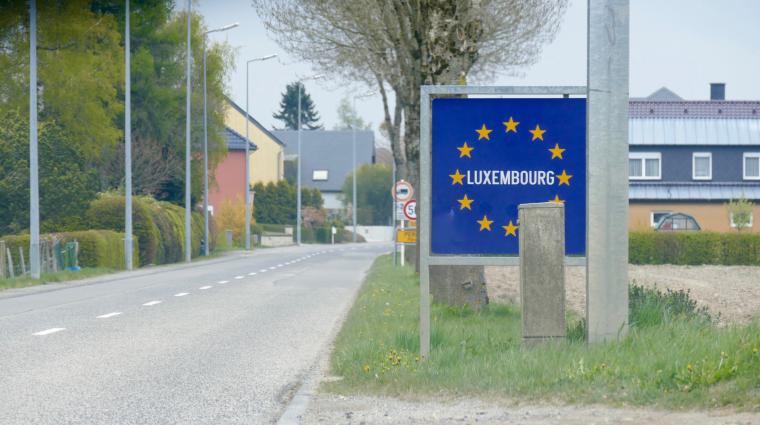 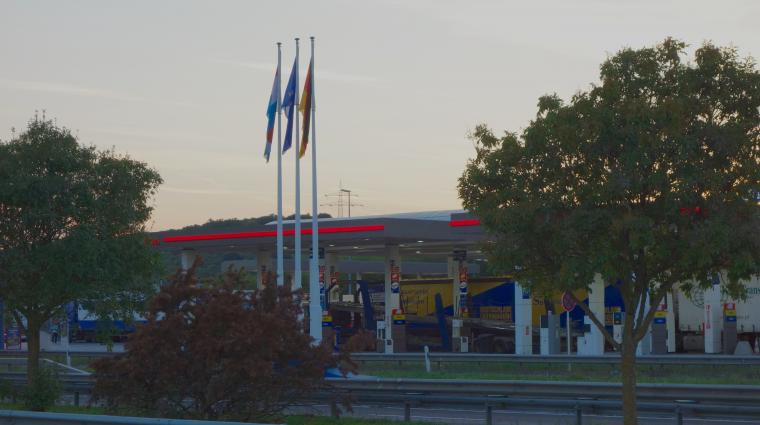 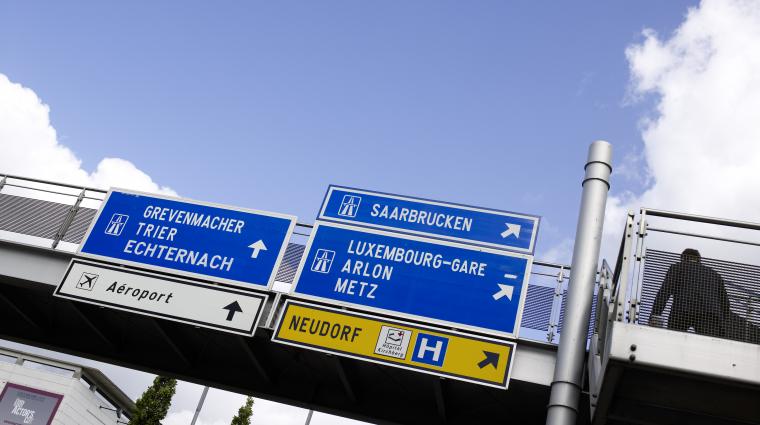 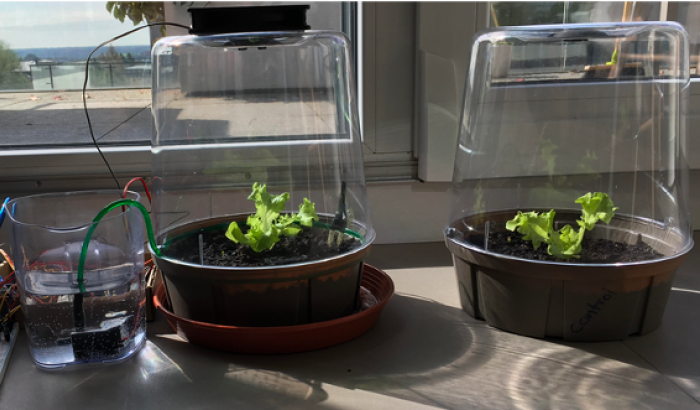 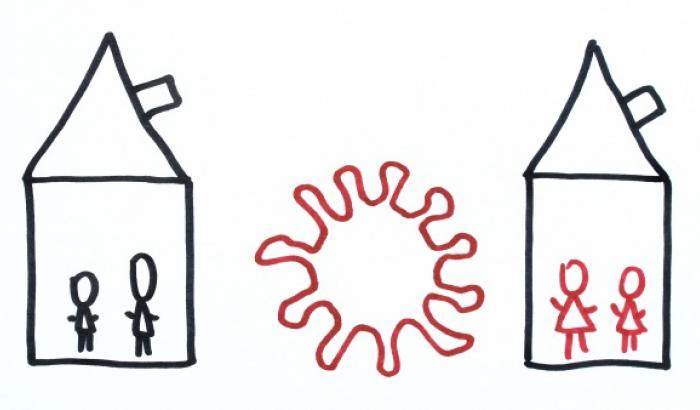 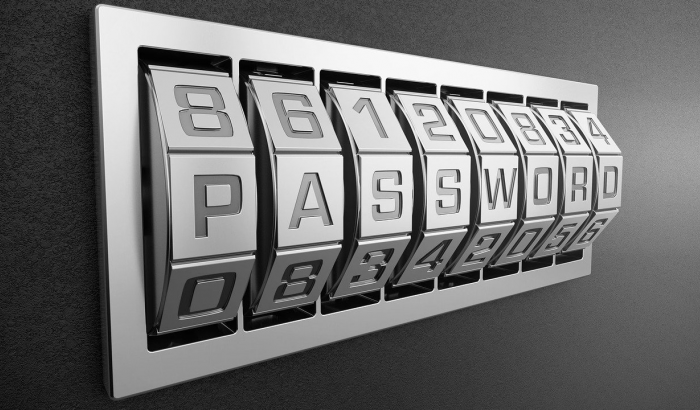